So a very small amount of misalignment (probably less than 1/16") is built into this machine. I didn't notice any wear on the bull gear or the pinion, so apparently the alignment isn't causing the gears to wear any faster.
Last edited: Mar 29, 2018
R

I've about finished up the head and just wanted to offer a few problems I had with the refurb. I've already received a lot of help from some of the experienced folks on this forum and in response trying to offer perhaps a little help to someone else along the way.

I ended up replacing all the bearings in the head and the motor, as well as the aluminum shield b/t the lower gear box and the pancake housing. I had to replace the timing pulley clutch sleeve. Also the brake bearing cap was broken, so I replaced it. Replaced a few odds and ends like a worn collet screw, belts, etc. Greased the very few places in the head with the recommended grease (Super Lube w/ teflon) like the gears in the speed changer, and the worm gear which tilts the head. The bull gear cavity takes Mobil grease, which is what I used there. Cleaned all the oil or grease passages. I think some were plugged.

As a note, I discovered it's not super uncommon the brake bearing cap to be broken on these heads. It breaks right where the part has been milled down, where the bolt holes are. On the new brake bearing cap, they didn't mill it down there (presumably because someone realized it was causing a problem) so the new one looks to be a lot stronger than the old one.

I'm glad I tore the head apart. It didn't sound bad to me when I ran it, but had some of the significant issues I mentioned. Most of the bearings were OK, except there were a few which were very dry and sounded raspy. One of the motor bearings also sounded raspy.

All the bearings came off reasonably easy. It doesn't take much of a press at all to get them off and on. I used various pieces of PVC as a drift. If I couldn't get a perfect fit with the PVC on a race I wanted to press on, I cut a piece of PVC pipe longways and then used a hose clamps to clamp it together to make a "custom" drift to fit the race.

I did have one major screw up. I watched a video of a rebuilder pulling the stationary half of the pulley off the motor. He said one could use a puller to pull off the pulley, but he used a custom made machined drift which had contact with the whole surface area of the pulley. I ended up using a big puller, which was a mistake. The pulley was really stuck on the shaft and I ended up cracking the pulley with the puller. I'm still waiting on a new stationary pulley I ordered for the motor.

Another thing that happened was that one of the bolts I pulled out of the very top of the head (where the very top bearing cap goes) had a little piece of aluminum thread come out with it. When I put it back together, I tried to tighten that socket head cap screw back down, but the remaining weak threads wouldn't hold it. It was stripped. I ended up drilling the hole out and putting a helicoil in there. While I was doing that, I noticed someone had already put a helicoil in different hole where the top bearing cap goes. I checked the last of the three holes, and those threads were pretty loose, so I went ahead a drilled it out and put a helicoil in the last hole too.

A lot of people don't like helicoils, and there are better inserts, but I wanted to get the head back together and move on. I think the helicoils will work fine in this spot, and probably better than the original aluminum. It's not like the cap screws have to come on and off every day. Only for belt changes, or a rebuild.

I didn't paint anything, just cleaned most of the housings with diesel fuel. I'm not against painting at all, it certainly makes machinery look good. Mine's not a very pretty machine, but I don't have time to strip and paint, and good functionality is good enough for me.

So far I've ended up putting another $850 (in various parts and shipping) on a machine I originally paid $2300 for. I'm sure there will be more expenses as I go through the base. That's probably pretty expensive by some people's standards, but I like equipment that works well, and works like it's supposed to.

I figure it's probably next to impossible to find an old Bridgeport which hasn't been well used, or cost a mint to buy one in mint condition. On a normal machine that's 30 to 50 years old, there are going to be worn parts which need to be replaced, unless it's been recently rebuilt. At least that's been my experience.

I'm just sharing this info., so people know what to expect. Here's a pic of the head back together, missing the motor because I'm waiting on the pulley. 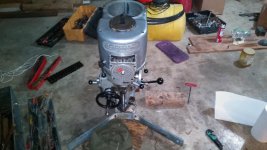 Awesome write-up Randalthor. Great advice and insight for any other newbie who has to cross this bridge. I'm sure your machine will run fine and offer many years of good service to you once you have it all back together.
You must log in or register to reply here.