Hi, I have problem width CNC2101 controler, after repair 5v and -15V power supply section, all power led's light, on front panel led "?" on and CRT show "00". I found it's supply voltage below 18V. I have schematic but power suply page are missing. Maybe voltage control circuit fault ? On RAM card I have dead battery - data are lost. Are someon have power regulators and supervisor section schematic?

The posters name makes a reply difficult. Just like all the other red flags.
S

I dont't have lot of time for this project but after some measurements i found 7915 vreg fault, -25v go directly to output. I order new one and try. Still don't have schematic for power suplly section.

I replace 7915 and found broken bc547 transistor shorting and driving relay in emergency stop circuit. Now i can switch on power, "?" Lamp go off and I can switch on colant pump and spindle breaker. Axsis breakers coil are energized but on CRT i have only 00 in bottom line. No reaction to keyboard.
Video:
Last edited: Aug 17, 2022
R

If the "00" is in the middle of the bottom line,that's not error code,it's mod number,it seems that there is communication problem between nmp51 and npc52,or the nmp51 is fault.
K

I would be impressed if you could repair this controller.. Do expect all kinds of problems, including broken Eproms ( with the software gone then) I do have several prints for this machine as I repaired one ( replaced the controller with a PLC) but I don't have the Eproms...
R 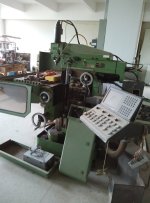 Several years ago ,I got a FP3N with a faulty CNC2102. First was the pwoer problem ,i cut off the load of the switch

power which build in the NPC52,and found a power transistor and a main capacitor short circuit.
Other problems:The NPC52 with a burned resistor, some short circuit capacitor and a faulty IC MC6821(which cut off

communication between NPC52 and NMP51).NMP51 with a faulty RAM tmm2016 that made the CPU not work.The NSP53 with a

faulty RAM so the NC code could not edit.
After those i felt the main electrical cabinet was too large for home use ,so i broke it up and draw the schematic,then

trow it away.Instead of ,a plc,some relays,three VFDs and a set of AC servor were used for 1P 220v.
It seems that the eproms are quite stable unless the lable was gone which cause program lost.but it's better to dump

I think that eprom are ok. I dump it and disassembly, code look good. Using logic analyser I check that NMP52 board wait for communication from npc52, checking control register of mc6821 in loop. I found this adres and check in program code.

Npc52 - drive keyboard and respond to simple command ( power on, coolant on, spindle breaker off), communication between axis encoder boards and cpu look ok, mc6821 used to communication between NMP and NPC boards is configured after start ( some value are stored to control registers) but during work this adres range are not used.

Can someone make video showing start of this controller? Led-s and CRT?

I need any prints of this controller- I have one file but its not complete and poor quality, I can read addres line marks. And power supply section, voltage reg are missing.

Today i go to company sold this type of machine width control fault for EPROM dump, i drive 400km ( Its not to long in USA standards but its half of my country), but all NPC52 eprom have fault A0 pin.
S 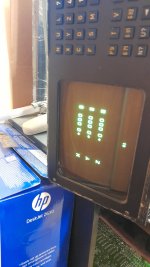 After lot of work, first succes - i found misconcection on two pin 6522. I replace socket and it's start working.

List of all founded problem:
Broken vreg ic in 5V section, broken power transistor, short cap in -15v and broken 7915, broke ram and cpu on NPC52, broken contact in socket, broken one wire on beyboafd PCB.
If someone need i have all eeprom dump
And I can send it.
A

Satanistik said:
View attachment 380429
After lot of work, first succes - i found misconcection on two pin 6522. I replace socket and it's start working.

List of all founded problem:
Broken vreg ic in 5V section, broken power transistor, short cap in -15v and broken 7915, broke ram and cpu on NPC52, broken contact in socket, broken one wire on beyboafd PCB.
If someone need i have all eeprom dump
And I can send it.
Click to expand...

You get points for your persistence here
Most would have scrapped that control long ago ,……cudos!
Cheers Ross
S

Yesterday I try to start control on machine, spindle gearbox start work after some relay clining, but servo work only in one direction. Old thyristor drive fault, I think it's SAA146 IC problem, but it's not avaliable, I found SAA145 and wait for delivery. All linear encoders work properly.
S

Ok, today machine work but i don't have any idea how to use it. Maybe someone have user manual in English?
K

I do have the manuals but in German only....But let me know if you are still interested.
Could you check something for me? The manual states that rapids is 1500mm / minute but my machine goes only 750mm/min. I still have 10 volts on the drive. Could you measure on your machine what the maximum voltage is on the drive when he goes 1500mm/min ? Thanks.
S

I need information about G71 to G85 code parameters description for CNC2102. I have manual to 2101 but it's don't have this function.
You must log in or register to reply here.