Every once in a while I can fire it up and cut my slots with little trouble, but sometimes I struggle with wire breakage for a while before it starts running smoothly.

Hi Machineit2:
Sadly, the parameters you're asking for don't translate well from one machine maker to another, so my numbers will be meaningless gibberish to your machine.

For example. on my machine I can set SPEED from 1 to 50.
That's not 1 mm per minute to 50 mm per minute...it's just that 50 is faster than 1.
My control knows what to do with an input expressed that way but yours will not.

Ditto for all the other parameters...a flushing pressure of "7" means something specific on my control...it's meaningless wank on yours.

So you need to find the burn tables for your machine model.
Start inquiring specifically for them and you will be able to get there once you find them.

Although my machine has all the parameters resident on the control it also has burn tables that came as a printed book included with the machine.
If yours has nothing resident in the control...those printed tables are what you're looking for.
I have no idea if those tables are the same for various Brother models.

Our resident Brother expert is a contributor named "Seymour Dumore"...he has helped a lot of Brother posters in the past and maybe he'll be willing to help you too.

STABILIZER: is a Brother specific setting that modifies the spark by some internal "magic" sauce. It has an option of 1, 2 or 3. I've always had it at 2 and never messed with it.
Somehow the cuts either became erratic or insanely slow.

CORNER SPEED: Same as above, except it only applies to corners and becomes active a certain distance before a corner and deactivates a certain distance after.
It isn't used particularly for wire breaks, rather to eliminate or reduce corner blunting.

S-ON: Automatic speed control. Based on the gap condition, the machine will increase/decrease the cutting speed to a "sensed-speed" to either make the cut more efficient or to reduce wirebreaks.
In this case the FEED RATE parameter has little effect, rather the machine will control the speed from 0 up-to the value set in SPEED LIMIT
If it's set to OFF, the machine will cut with the speed set in FEED RATE, no variation. Basically for skim cuts.

T-ON: Thickness control. It applies an extra level of protection when cutting parts where thickness varies ( cross holes, different heights etc ) by increasing sensitivity and reducing the overall speed
to better respond to variations in gap condition.
If it's set to OFF and S-ON is set to ON, you gain speed but reduce the machine's ability to quickly respond to gap changes.
E

Hi. I have cutting technology list for my Brother HS-70Am . I hope this helps you 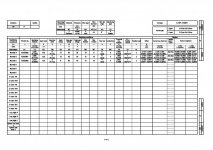 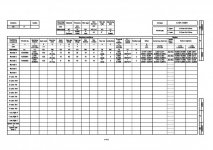 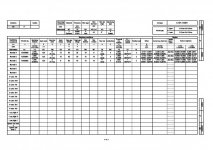 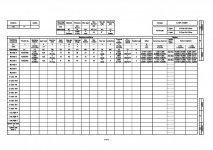 Well, I dug out a manual called "Technical Manual for Service Engineer HS-300." When I got the machine eight years ago it did not make any sense to me. Now I look at it and it makes sense. It lays out all the conditions based on material and thickness. Turns out I was off on two setting by one number, wire tension and wire speed. It is a slow machine, taking about 45 minutes to put that 1.1" deep slot in that 2.75 thick material, but it works just fine. I

I'll post the pages from the manual if I can.

Hi again machineit2:
You wrote:
" It is a slow machine, taking about 45 minutes to put that 1.1" deep slot in that 2.75 thick material, but it works just fine."

4.03 square inches per hour in 3" material with 0.008" wire for a machine of that vintage is not that bad.
Watching a wire cut is ALWAYS like watching paint dry.
I'd be happy.

BTW: If you want it to go faster, one of the things you can do that often helps, is to change the power contacts and the discharge cables, put in new filters and DI resin and wash out the DI system and re-fill it.
And while you're at it, clean the conductivity probe in the DI tank and make sure the chiller works properly.

I am happy with it. Bought 8 years ago for $6,500 and it has much more than paid for itself, plus gives me options I would not have.

Made a video of it running many years ago, if you want to see it: YouTube

Thanks---Mike
You must log in or register to reply here.