I have an LNS bar chamfering machine. The cutter head spins. It is supported on the outside of the head by a large bronze bushing. That bushing goes inside a housing (painted yellow in the picture below) that is fixed to the frame of the machine. The bushing is severely worn out, and I need to replace it. I can't seem to buy one from the manufacturer, so I'm going to make my own out of a cast 660 bronze bushing that I can purchase and modify a bit. The ID needs to be counterbored and a groove put in the bore for a retaining ring that keeps the bushing on the cutter head. I'm looking for ideas on how to lubricate between the cutter head and the bushing. I can apply grease to the OD of the bushing, but it looks to me like the cutter head should spin in the bushing, not that the bushing and cutter head spin in the housing. I could be wrong here, though. The existing bushing is so worn that I can't tell what's what. I can't put a grease fitting on the OD of the bushing because the entire OD slides into that yellow housing. There is not enough thickness of the bushing to recess the grease fitting. It would be a pain (and therefore probably not done) to have to remove the bushing to grease the ID of it. So how would you go about making it easier to grease this? Hopefully the pictures below help explain the things I couldn't with words.

Also, would grease grooves on the ID be a good idea? 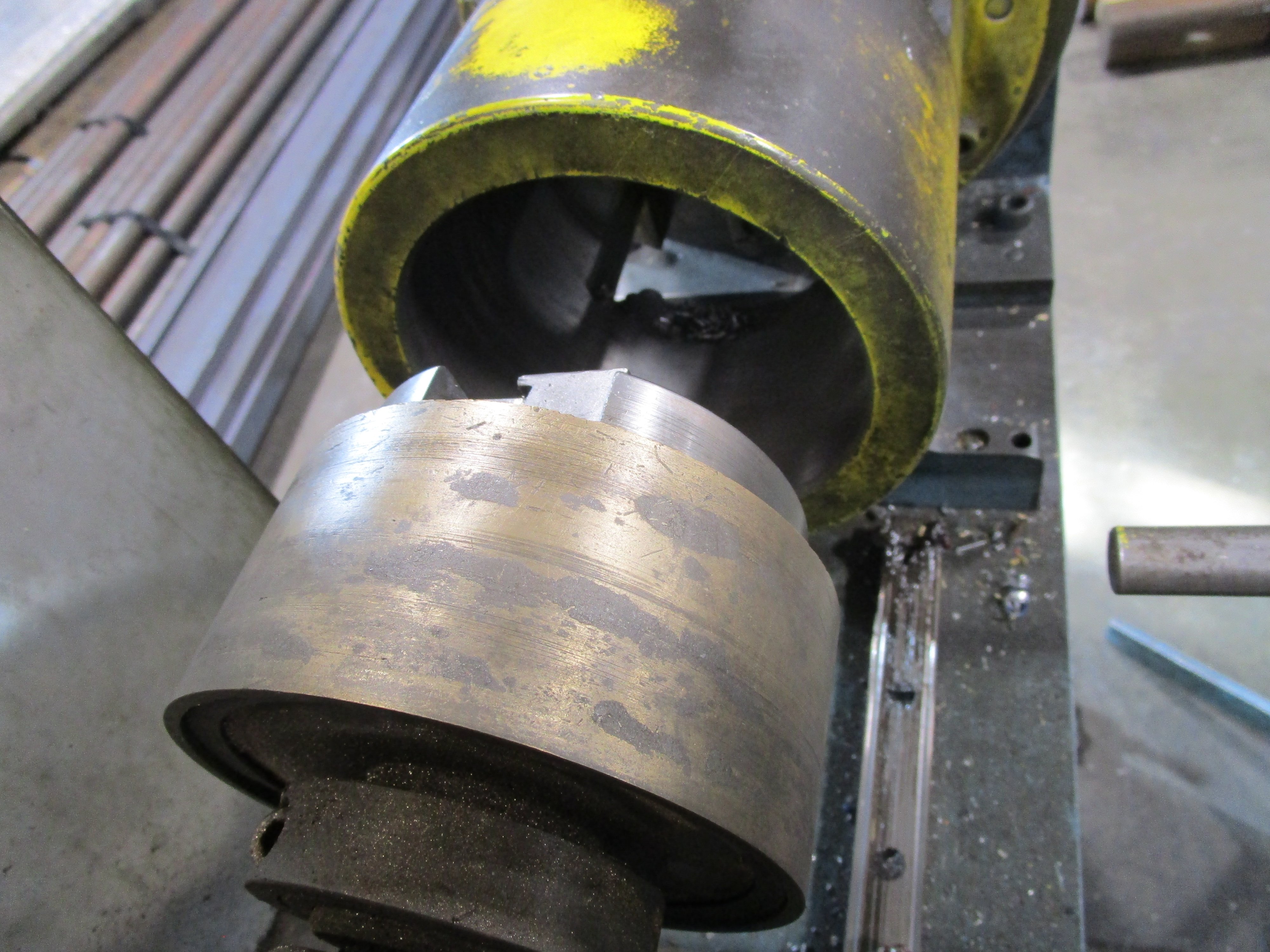 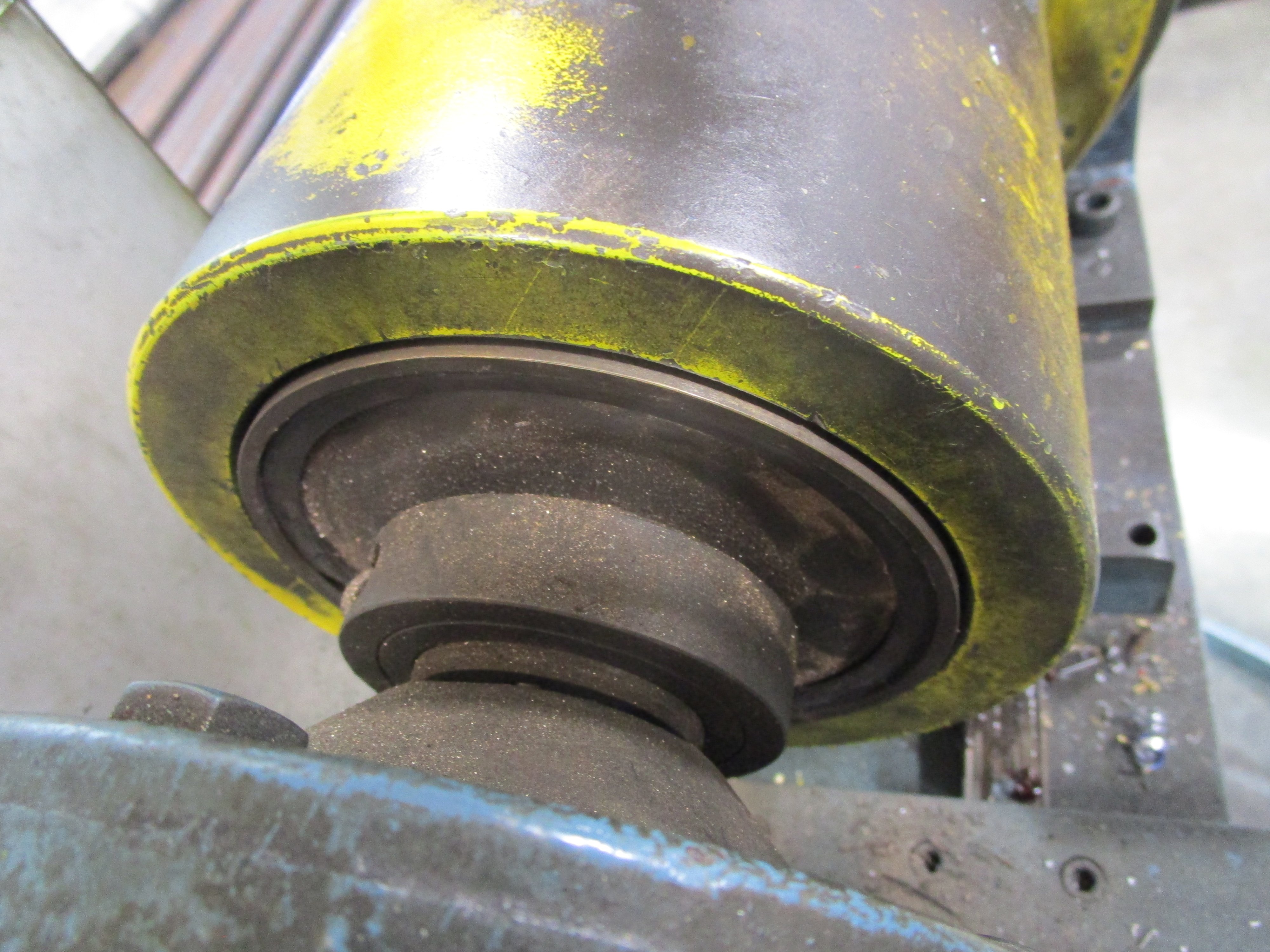 I've never seen a bushing that spins intentionally! If you can't easily lube it, this sounds like a job for Oilite, not solid bronze. You can get Super Oilite, which might work better and be a bit cheaper.

There is also graphite-impregnated bronze which, like oilite needs no other lube and it stays dry.

If there was a way to fabricate a seal to keep chips out you might turn the old part to accept needle bearings.

Conrad Hoffman said:
I've never seen a bushing that spins intentionally! If you can't easily lube it, this sounds like a job for Oilite, not solid bronze. You can get Super Oilite, which might work better and be a bit cheaper.
Click to expand...

The ID of the housing is 5". I looked in the catalog of the bronze supplier I commonly use, and they did not have any Oilite bushings that large, but they did have the cast bronze bushings that were close in size. I will dig deeper to see if there is a better material that I can make this out of.
B

That size and ,I assume, cost I would think about plastic.
Bill D

I would take an end mill and counterbore a recess on the housing.
Then drill and tap for a grease fitting that was below the surface.

Hard steel on bronze makes a decent bearing, is it possible to make the outer part out of steel? or bore it and add a (Loctite in) hard steel sleeve
Or chrome plate the bronze? (male or female). chrome can be .010 thick.
Perhaps drill and tap the male part and make a spider spindle of it. Loctite the spider screws (with heat melt Loctite).

Conrad Hoffman said:
I've never seen a bushing that spins intentionally! If you can't easily lube it, this sounds like a job for Oilite, not solid bronze. You can get Super Oilite, which might work better and be a bit cheaper.
Click to expand...

Its done intentionally where the forces are always acting in one direction....Steam locomotives used "full floating" main rod bushings that move in both the housing and on the crank pin.
Auto makers tried "Full floating" rod bearings (Ford V-8 60 and Pegaso Z 102) for starters....Other applications i am sure exist.

Not sure it applies to OP's machine.
Would want some additional info...What sort of RPM are we seeing here?.....
What sort of forces are involved here...what's the purpose of the bushing?

AlfaGTA said:
. . .Would want some additional info...What sort of RPM are we seeing here?.....
What sort of forces are involved here...what's the purpose of the bushing?. . .
Click to expand...

With a chamfering machine, obviously capable of fairly large diameter bars, I'd expect slow on the RPM and 90% of the force axial. But... since that old bushing is so worn I'm either way off on that or the machine has been used a LOT!
W

I made a short video of the operation of the machine. Hopefully it gives a good idea of how this machine works and what the bushing does.


The cutter spins at 130 rpm. I tried to show the play the bushing has. It's a little hard to see. You can actually hear it clicking if you have the volume on. You can also hear the awful chatter when cutting that bar. That's 2.125" S7, and is my worst case scenario. It destroys the carbide inserts in the cutter head. I imagine it's due to the chatter. Smaller diameter bars of steel and any size aluminum aren't really a problem. I did have a not-so-great time with some 1.75" Stressproof recently, but not as bad as the S7. And I have quite a few bars to chamfer, so I'm hoping that by tightening up that bushing, I can get through a bar without chipping the insert.

I also tried to show in the video how the motor is moving side to side while cutting. If you look carefully when I show one of the mounting bolts, you can see it moving. The bolts are tight. There's enough force from the cutter to move the motor around since it's getting so little support from the worn out bushing.
R

jackal said:
I would take an end mill and counterbore a recess on the housing.
Then drill and tap for a grease fitting that was below the surface.
Click to expand...

yes grease fitting on the yellow housing and also make a couple shallow grooves on the outside of the bronze bushing to hold grease. if you can make a multi start thread, a few shallow passes .015-.03 deep with a sharp point threading tool will work great. done this on the id of some brass bushings that had a spinning shaft. it had a center groove on the od and id, and was drilled for grease to pass thru from the housing, the id "threads" allowed grease to travel to the ends of the bearing.

like a single tooth cutter head inside a floating bushing/bearing going into a steady.


Restoring the fit is important as well as lubricating. The fit may be more important than the lubrication.​

It seems the manufacturer was counting on bronze to bronze and slow RPM would give sufficient life to the machine, and bronze on bronze can run without lubrication for non-galling but would have wear over time.


lubricating alone may not give sufficient control to the cutter head.​ 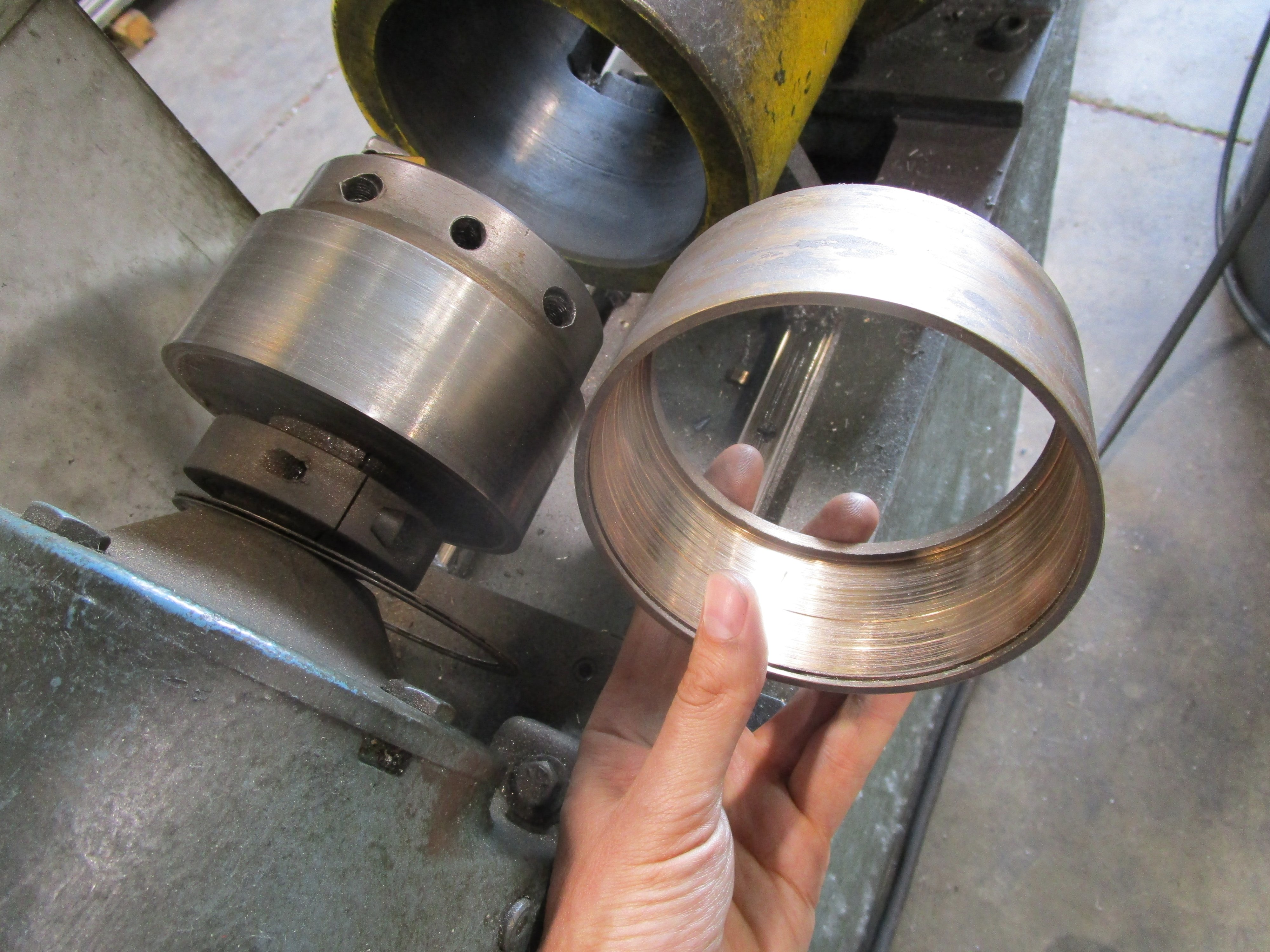 I took the bushing off to get some dimensions. It looks like both the ID and the OD of the bronze bushing are each worn .018" off the diameter. The ID is very scored. The steel pieces that the bushing rides against seem OK. At least the cutter head isn't worn tapered.

I'm trying to locate some bronze to make the new bushing out of. I can get a piece of cast bronze that would make two pieces for under $80. The best I can find for Oilite is over $270 for a piece that would also make 2 pieces. I'm not sure the self lubrication is worth the extra dough. The piece on there is just cast bronze. But it also wore out due to no lubrication and no good way to lubricate it, so...

I'm good with staying with the cast bronze as long as I can keep it greased. The material is cheaper and nearer the net shape I need so less machining. It is also what the OEM part appears to be made of. I'm just still not sure how to keep it lubed on the ID. It's only .140" thick between OD and ID so no room to recess a zerk fitting. Maybe I can use a needle type grease gun adapter to force grease into a small diameter cross hole in the OD of the bushing. Like this:

Or maybe I just tap a hole for a zerk fitting and remove the fitting after I'm done greasing. Seems like it might be a pain in the butt to have to screw it in every time.
W

thermite said:
Can you not add an Alemite-Zerk to the HOUSING that OD runs against?
Click to expand...

Is there any chance that the old parts can be built up by a form of spray wedding? If so spray welding a softer and easier machined substance like copper or brass, with the intention to chrome plate might be considered.
*Copper, brass and bronze powders are being preheated below their melting point, accelerated and delivered to the substrate shrouded by an inert gas. This is how we can spray unoxidized dense coatings at a lower cost than HVOF and Cold Spray.

Looking at a manual are there any recommendations for lubricating

QT OP: (It looks like both the ID and the OD of the bronze bushing are each worn.018" off the diameter.) so a buildup of about that or adding whatever wore off the main body parts might be good.
Last edited: Jul 27, 2022
R

The housing should use a spring loaded grease cup rather than a zerk fitting. The cup will hold about one ounce of grease.

The grease cup can also be replaced by a adjustable drip oil pot if the replacement bushing is made with a small radial clearance.
Last edited: Jul 27, 2022
You must log in or register to reply here.

S
Alternative Materials to Bronze for high-load bushings... are there any?
2 3 4