I got myself distracted today and pulled parts out of bushes and barns to see which enclosure I want to put on my FP4AT. I do not like the original enclosure with its awkward doors in the front and the fixed window on the right side.
When I originally got it, I steam cleaned the enclosure and even hoped to blast the paint off off it. It had been painted with a toilet brush type implement using some thick radiator paint and without any regard where paint should go. A real mess and I cannot wrap my head around who does this. Did he put his base cap on inverted? Was he a gender studies major? But I do not want to stereotype, though I could go on. It looks value diminishingly horrible and this paint extends even to the machine itself and the NC table. Really really bad. To not see it I had it in the bushes outside the last 2 years.
These later style enclosures are quite heavy duty and as disgusting as it looks, this one is reasonably straight. The windows seem to be replacements, they are only 3mm thick and badly cut. Re-doing the entire enclosure at a professional level (getting it blasted and painted) would cost more than I paid for the machine.

I also pulled an older style FP4NC chip pan out of the bushes, which has been there several years, but for all the add-ons I had to really rummage in the barn. I never had an FP4NC with a full enclosure, just piece parts. But I think I got a set together from at least 2 parts machines and some parts from unknown locations.
It is a lot of stuff! I was expecting interchangeability issues, but it seems to go together quite well.
I like that it is lower and has a tiltable right window. More windows in general.
But more flimsy and not "correct", or as James May would say "standard". 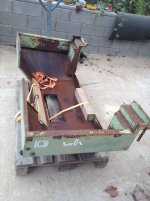 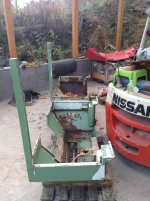 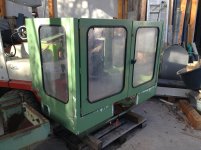 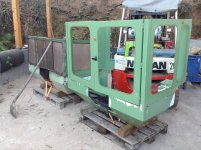 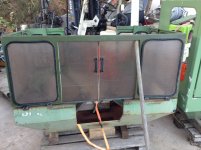 I think I will not even get quotes for blasting, it will be too expensive, but may change my mind after some hours of trying different attachments on the angle grinder. I will not go for perfection, I just do not want to be repulsed when seeing the machine.
A

The FP3NC i have at home is the machine that crashed off a lift gate prior to my ownership, at any rate the enclosure needed rebuilding.
Wrote the project repair up , unlike you i was not fortunate enough to have any spares......at any rate when done with the sheet metal repairs took all the panels to the local powder coating shop. They were able to match the RAL 6011 color in a "river" finish (that has texture like the machine.
At any rate they clean everything included in the painting cost. Was not really too expensive when all said and done and saved me having to muck about removing rust and old paint and applying a new finish...something i truly hate, and it was done turn key....finished in a week or so while i was doing other tasks.
Finished paint is very tough and scratch resistant.

For like 500€ I'd love to drop it of at a paint shop and get it done, but I see it beyond 1000.
Since I live frugally now, I wondered how much work it might be using one of those Sauerkraut Pads, which are brilliant. So out of curiosity I did this in like 5 seconds: 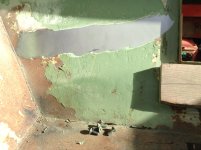 So this got me excited and even though I should be doing completely different things I could not resist and 2.5 hours later I had the chip pan done to 95%. Luckily it was not only warm today, but also windy.
Hashtags: Martin's "Industrial Smoothing" and "It's not easy being green".
That thing in the middle is a Covid mask.
I think I saved myself at least 50€ per hour, possibly 100€.
I can strip paint faster on flat surfaces with that pad than I can sandblast it (I have an industrial blasting cabinet, so I know). And I get a better surface. 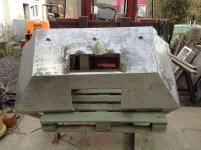 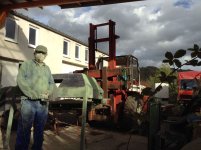 Moving along. They promised decent temps last weekend, but in my area the fog never rose and it stayed frigging cold.
So this was done at just above freezing and in a light breeze.
It ain't good, but it fits the machine and I won't get disgusted playing with it. 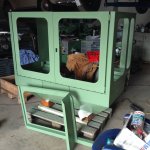 What is a Sauerkraut Pad?

Gentlemen of the forum

I have an fp3nc chip pan and most parts for full enclosure I believe.

It’s free to someone who will pay the crating & shipping. It would also need sand blast & paint. If interested I will take pictures.
You must log in or register to reply here.

VFD vertical mounting or the VFD cops show up?

R
best metal for building a mill enclosure out of? insights?
2