R900
I have a 10 hp rated Drives Direct "plug and play" 240 (nom) single phase in, 440 V three phase output box with the separate line filter box (then?) sold to make the supply suitable for use with CNC machines. Wired three phase and neutral, just like a proper 3 phase supply. I don't use the VFD function. Its permanently set to 50 hz.

I use it just like proper 3 phase supply. All my machines are directly connected to a 440 V whole shop bus and retain the original contactors.

It all just works and has been doing so for rather more than a decade. Even the splendidly steam punk oil immersed contactor set up controlling the two speed motor on my wartime P&W model B behaves just fine. Main limitation is starting power. Drives Direct advise that motors of no more than half the rated power be used. I've unilaterally derated to 1/3 rd. Seems wise to me and partially vindicated by the odd grunt when running up my Smart & Brown 1024 lathe, which has no clutch, with a decent size job mounted. I've had 9 hp worth of motors running at a time which didn't seem to faze the box.

Hafta say it was supposed to be a temporary expedient as the box popped up on E-Bay for half new price when I was having a fit of bad temper with the noise from my rotary converter and the difficulties of actually getting an electrician to connect up the £5,000 worth of three phase incomer the power company (eventually) ran to the house for me.

Nowt so permanent as a temporary job!

I'd not run large or recipriocating a compressor off it (although its happy with my Hydrovane 502). Dedicated VFD for that with the boost parameter enabled so it runs up to speed rather than be simply kicked with full volts..

My rotary converter was a MotorRun static converter box with a hefty three phase motor bolted on the side. Worked fine once I got the capacitors trimmed. But noisy and the current phasing was variable.

The older I get (68 now) the more favourably I view paying more for just works properly rather than hours of DIY to make £1 do the work of £10!

I don't trust the import 240 to 380 VFD boxes. I suspect the input rectifier configuration doesn't give enough voltage headroom to work properly. Like the rash of cheap conversions done on use industrial boxes back in the day when all this was a novel thing.

Well, it's time for an update, and I have good news and bad news!
The good news is that I have now changed the 3kW spindle motor for a brand new, shiny dual-voltage one. Wired up in delta and connected to a Chinese VFD, and it works! At the moment it's a drop-in replacement for the old one. But as you can see I went for a B35 frame so that in the near-ish future, I can mount this on top of the head to save room behind the mill when the head moves back. I'll have to find a big block of cast iron or some decent steel to raise it above the height of the overarm support, and give it adequate rigidity to transfer the torque through a few belts. 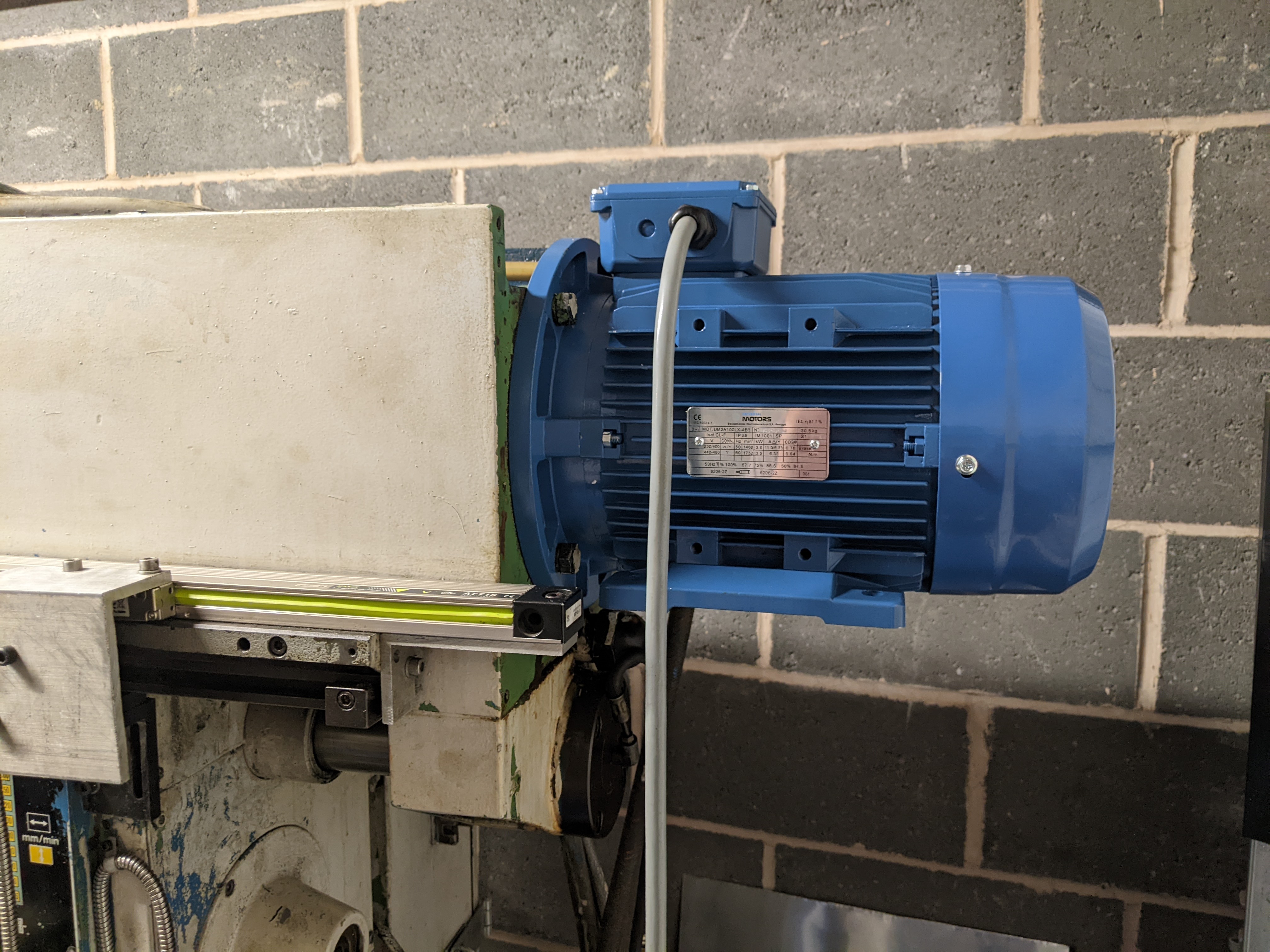 The bad news is that, when I fired it up... oil came absolutely pouring out the (horizontal) spindle. The faster the motor runs, the more of it comes out. And after the motor stops, it keeps dribbling for a good few minutes before it eventually stops. It definitely didn't do this before. But the machine has been moved about twice since then. Perhaps one of the 50-year-old seals in there finally gave up the ghost?
The other option of course is that I somehow did this while replacing the motor. I did open the cover on top. Perhaps a piece of swarf dropped into the oil bath and instantly sliced the seal open when the machine started running? Looking at the casting inside though, I doubt it. Anything that dropped in should have stayed relatively localized near the section where the oil filler cap is. And I think it's been dripping slightly for a while now, running the machine up just exposed the problem. But I guess it was low on oil and needed a change anyway, so maybe this is for the best. Another interesting thing: the oil seems to be coming from 2 places. Either it seeps out from between the bearing surrounding the spindle, or it pours from a little hole underneath (no, not the drain hole, I have no idea what this is for). 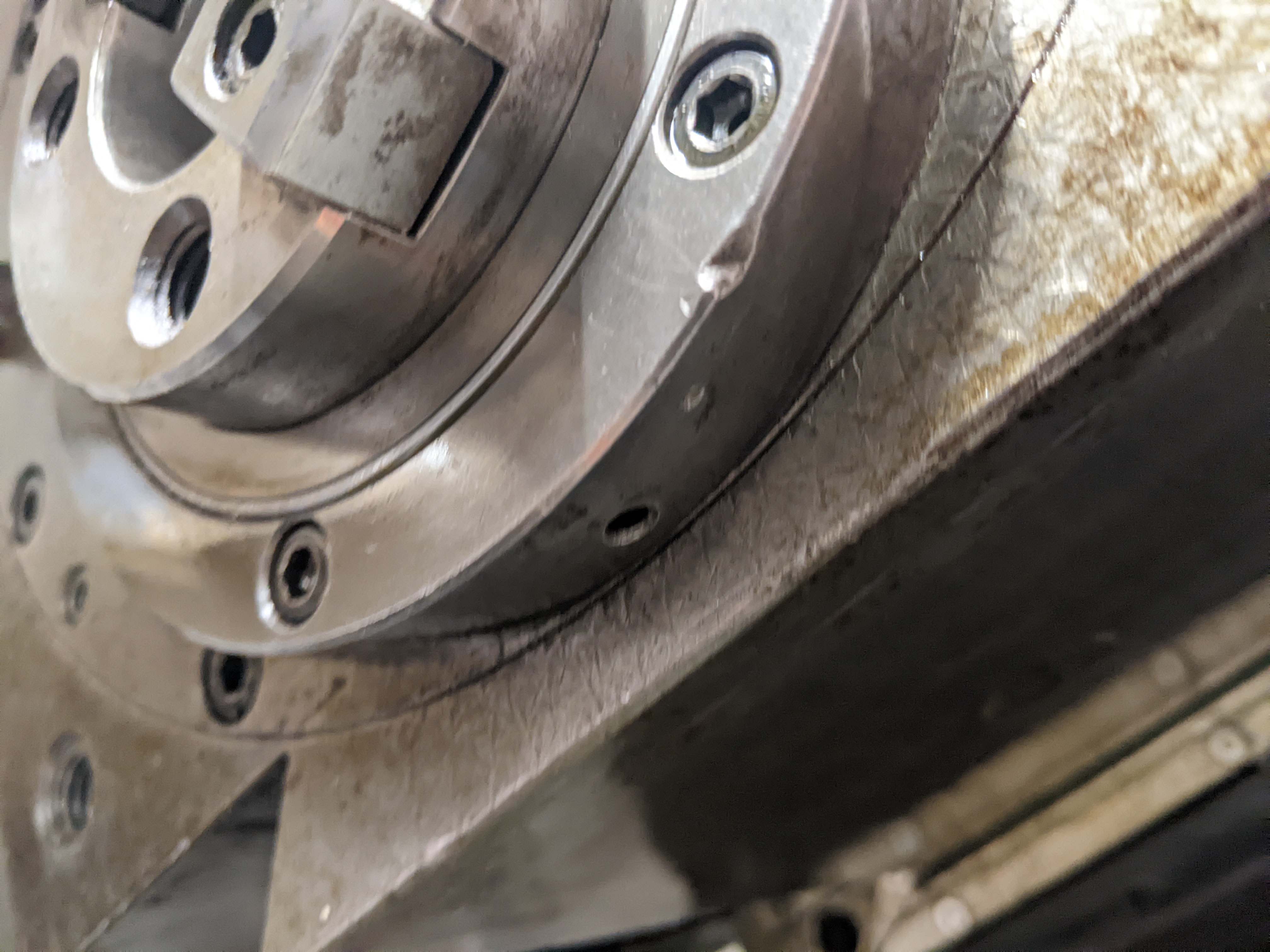 So, any bright ideas? Any idea what seal must've disintegrated to cause this? And how do I pop the spindle gearbox out to have a look? I tried removing this ring around the bearing but it.. really won't budge. First things first I need to open the drain plug on the z axis ways, and drain all the oil out. That should let me have a better look and prepare for removing the gearbox.

Edit: One more thing! I've been looking at oil for the gearboxes. Any thoughts on this stuff? 4-6 Engler (as per the manual) seems to be roughly SAE 75W or 80W equivalent. So I'm guessing this gear oil should be about the right viscosity. I'll probably give the company a call on Monday.
Last edited: Aug 20, 2022
A

Don't believe that you have a seal issue, at least not at the spindle exit.....Never seen a machine tool that used an oil seal at a spindle...
It just is not done. Machine builders rather use slingers close fits and drain backs to control oil from exiting the spindle nose.

Perhaps your machine was overfilled on the gear box oil. Might check the machine leveling....a machine set nose downhill might have leakage issues.
In addition, check the rotation.....some slingers are direction dependent...Don't know your machine but early Deckels are built to run in one direction only...YRMV.

Wondering why you are sure that that hole at the bottom of the spindle retaining ring is not a drain hole? Looks like could easily be one...
Do you have a drawing of the spindle and gear box?

Also...perhaps moving the mill about has stirred up some sediment from the gear case that has clogged the spindle oil return drains....

Generally one would not use a "gear" oil in the head stock of a machine even though there are gears within. Spindle bearings usually need something finer...
Would choose something like an "AW" 46 Hydraulic oil. The AW stands for "anti Wear" and those oils will work well in a geared environment, and be better on the spindle bearings if they use the oil in the box for lubrication (might well be grease packed)

Finally, don't think a chunk of Cast Iron is needed for a motor mount for that drive motor.....Me , I would consider a reasonably thick piece of
aluminum. Milled for stiffening ribs perhaps..like a piece of precision jig plate (MIC6)
Nothing there that requires excess stability and the mounting area is limited ,so going to steel or iron might be overkill and add excessive weight to the the slide.

ballen said:
My Deckel mill had two badly-applied coats of green paint over the original gray. Some of it flaked off very easily, and some of it really stuck. I think it was just a question of where they had cleaned it before painting.

I experimented with different solvents, but couldn't find anything that would take off the green without damaging the gray. But worth a shot.
Click to expand...

I know I'm replying to an old post, but I did something like this recently. I had a vintage Saab 96 that had been brush painted with Rustoleum over the original black paint. I tried some eco friendly orange (d-limonene) based paint remover - it took all the Rustoleum off and left the original paint. It was dull, but it was at least a good base coat without taking the car all the way down to the metal.

I then tried the same stuff on a small section my 1980's Abene, which has a crap brush job over the original paint. It worked on the small section I tried, and the original paint appears to be in pretty good shape. I would expect it to work better on a mill than on a car since the paints used on a mill would probably be more chemical resistant, but I've also seen some pretty frickin impervious auto paints - I stripped a Czech Velorex sidecar once and just about had to resort to a shotgun to get the paint off. Maybe pre-VOC regulation stuff like Imron?

I've also seen some soy-based paint remover, as improbable as that sounds. Anything amateur- and eco-friendly is probably worth a try.
T

Since this seems to be a fairly active MHX00 P thread and the fact I insanely also picked up a MH600p because it had the universal table and tons of tooling I wanted to contribute to the QA in this thread.

The motor on the 600p is mounted above the Y ram and drives via a belt.
The so called control is pretty well toasted on mine as well.
The PO added a new scale/readout and simple variable DC for the servo/power feed motor
so the old point to point capability is gone.

I believe the hydro pump is 3phase and could be run from a small VFD.

Not sure how the XYZ clutches are activated yet as Im short of manuals. Could be 24V?? Anyone know?

If retaining the power feed some logic needs to be retained to apply appropriate clutch and release axis lock.
Also manual controls for each axis lock and drawbar.

These old machines have plastic central lube lines that cracked/damaged
Inspected/replace before putting in service.

Does anyone have a source for the lines/ ferrules ?
A

Fittings are an integral part of completing turn-key lubrication systems. Email us to find the right fitting for you.

McMaster-Carr is the complete source for your plant with over 595,000 products. 98% of products ordered ship from stock and deliver same or next day.

Oh right I forgot about McMaster.
You must log in or register to reply here.