OT: drilling out an ignition lock

i have to drill out the cylinder on a cherokee xj. does anybody have experience/advice? how hard is the stuff? should i grind out the chromed front
cover?
M

There's actually tutorials on doing this on Youtube, might search for a few. Some better cylinders will not only have the hard spinner covers (not sure if the one you're dealing with is actually hardened or not), and some have additional hard dowel pins embedded in the cylinder itself to make drilling more difficult.

Wear good safety glasses - a drill bit grabbing a pin or drill-defeat element could shatter the bit itself. I have some nice divots on my glasses from this sort of fun.

Or even try picking it. There's tools to help make this easier and decode the existing pin arrangement to get keys made.
D

i know the arrangement of the platelets, because i configured the cylinder myself. it didnt work though. so i removed three of them, that seemed to hinder the function. after checking 100 times i inserted the cylinder and it doesnt move. i know there are tools online, but i dont have the slightest idea how to "pick".

edit: will there be dowel pins in this?

I don't see any obvious pin holes in those those two pictures, but the sliders themselves may be hard and so function as I described.

If you want a lock picking education, this guy is pretty good:

You do not have to drill out the entire cylinder. Just enough to remove the narrow neck part at the back. On yours looks like 1/2 the diameter or a little more if you stay centered.
Bill D
1

Seriously, I’d take it to a decent locksmith… last time I had something like this, I think he charged me $20!
I can easily see $20 in heartache trying to do it yourself!
M

Not a bad idea, but Dian's in Switzerland. So even a cheap locksmith would have a 100 Euro minimum...

i was actually hoping to only have to drill half way though, to make the rectangular latch relax. another idea (i never heard of) is to drill out the "hook type latch" that engages the outside body from beneath. that seems easy. it would destroy the square hole, but that could be fixed with some steel filled epoxy, i guess. thoughts?

as to locksmiths, its hilarious but there are none that will toutch a vehicle. i phoned around for half an hour. front wheels are locked of course, gearbox too, but i can put the tranfer case into neutral.
D

Go to You Tube and find "The lock picking Lawyer". He has a ton of very short videos on picking techniques and covers pin and tumbler, dimple, wafer, etc.
When I started lock picking as a hobby his amazing techniques and teaching ability will answerer any question you may have.
The lock lab which Bosnian Bill I believe is another very good resource.
C

doug8cat said:
Go to You Tube and find "The lock picking Lawyer". He has a ton of very short videos on picking techniques and covers pin and tumbler, dimple, wafer, etc.
When I started lock picking as a hobby his amazing techniques and teaching ability will answerer any question you may have.
The lock lab which Bosnian Bill I believe is another very good resource.
Click to expand...

Yup, I watch both of their videos. So far the only skill I've been able to pick up though is the ramset.

doug8cat said:
Go to You Tube and find "The lock picking Lawyer". He has a ton of very short videos on picking techniques and covers pin and tumbler, dimple, wafer, etc.
When I started lock picking as a hobby his amazing techniques and teaching ability will answerer any question you may have.
The lock lab which Bosnian Bill I believe is another very good resource.
Click to expand...

Practice practice, I have been doing it since the early '80s. Have a bunch of locks and practice while watching a movie or listening to music. It is all about feel and good mental picture of what the lock looks like functions on the inside and relating to that the feed back you get from the pick.
Ramset ++++
H

Just get a jiggler key set, very cheap and stupid simple to use, if the lock has jammed from a failure the. Your out of luck and have to drill it. I’d suggest a narrow step drill bit and they are pretty stout
G

Chrysler ignition switches unbolt with 3 or 4 security torx screws. You throw it away and buy a new one with lock cylinder, door locks and keys for $100 or so.
B

My town of 200,000 has no lock shops left. It is all mobile locksmiths. So $100 or so to come out to you then more to actually do anything. Cheaper to drill it out and replace the entire lock for most things.
Bill D
J

Are you just drilling the lock to find out what’s inside? What is your desired purpose?

There’s no way you fix the cylinder, or the problem of starting the vehicle, by drilling any part or amount of the locking cylinder. Casting “No user serviceable parts” was too much of a margin on something like those cylinders.

If the issue is having a vehicle that functions with an individual key, as it should, your best possible solution is to buy new cylinder(s). However many, as a matched, given and returnable set. Keys included.

Just trying to start the vehicle, no security concerns? Find the wiring diagram and jump the needed terminals to start the engine and turn on whatever accessories.

If you just want to look at the inside of the lock cylinder, I suggest a hammer. You’ll ruin the cylinder just the same with drill or hammer and whatever remains will neither work or be capable of repair. The hammer will reach those ends quickly enough.

Even anywhere in Europe, if you’re too remote to get however many replacement cylinders and keys for something like a Jeep, you probably don’t really need a key.

Best of luck. I fail to see the world where your time is worth anything but ordering replacements, paying whatever shipping and waiting.

Your problem will not be solved by drilling a hole.

The security is a joke.

There’s a block or pin that expands out when the cylinder turned over for the first time ever.

With the old cylinder out you just push the new one in and turn the key, it locked itself in.

Getting the old cylinder out requires the cylinder to turn, and when it’s turned over to run you have to push from the bottom (remove lower column cover) to retract the “pin” or “block” back into the cylinder body allowing removal of the whole cylinder assembly.

My brother owns a 97 xj and 3 of our buddy’s (who we trail with) have xj trail rigs.

I’m more then Familiar with them, use a Chrysler JIGGLER key and its turn right over, it requires ZERO skill or “feel” just jiggle and go.

If the lock uses a pin then it’s hardened and won’t drill out, the block style pin is soft as butter and could easily be drilled

A slide hammer will destroy the Column and your new lock won’t lock in. (It’ll literally fall out)
Good luck
D

thanks for all the input, guys.

the whole storry: 1999 xj. lock jamed up a couple of times. go-to mechanic said no parts available. i ordered a configurable cylinder (dorman) from rock auto. old lock jamed up again in garage. i was able to free it with a small hammer. i could not configure the new lock for the old (chipped) key, didnt work. new cylinder with new key (as it came) worked, but the anti theft didnt, unless you held old key (very) precisely over the new. as its wifes car i didnt want to leave it like that. so i took out three platelets, which seemed to make cylinder work. checked about 100 times. installed like this and its jamed. tried hammer, a vibrator, compressed air, oil, wiggling. no effect.

i will go and watch the videos, but something probably went wrong with the lock.

"Chrysler ignition switches unbolt with 3 or 4 security torx screws. You throw it away and buy a new one with lock cylinder, door locks and keys for $100 or so.":

i thought about this, but i only see two screws. i was not able to find a whole assembly anywhere and am afraid to mess with it. if i manage to brake anything the vehicle is done for.

off to take a picture. 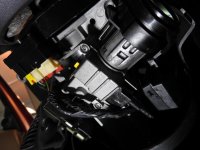 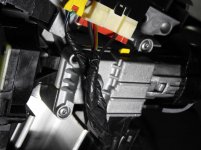 "the block style pin is soft as butter and could easily be drilled":

im tempted to go this way, as mentioned above. you mean the sprung rectangular pin, that engages the outer body, right? and where do you get a chrysles specific jiggler set?

(btw, i live in the probably most populated spot on earth, but yes, in a way quite remote: a lot of stuff you would take for granted not available.)
J

How so? A friend drove a Jeep with a household light switch as ignition switch.
H

Yes the rectangle pin that holds the lock body into the steering column, I drilled one out already. I don’t recall ever worrying about a chipped key, at most the little contact that makes the “reminder ding“ when you leave your key in the ignition is fragile and I broke mine so it bings whenever the door is open.

Your in the USA right? 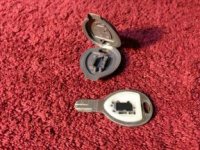 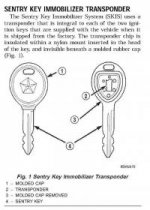 The 99-2001 xj had a chip in the base of the key and it can be removed and taped to the steering column.

They call them coffin keys, but I don’t know if that have a Chrysler jiggler key, I would google a Specifically labeled “Chrysler jiggle key”
You must log in or register to reply here.

How to turn/grind between centers with deliberate small eccentricity?