Your Suggestions, Please: Best Way To Remove PSA Stickem from an Acrylic Base Pad

Hello, I have a weird application in my shop where I've had to create my own base plate for PSA sanding pads. Long story.

I've removed a previous pad, but I have a lot of stickem left on the acrylic base pad. I tried hot water, soap, vinegar, and none are working.

I read online that I shouldn't use acetone or nail polish remover, but would these work fine and prevent pitting of the Acrylic if I wipe fast and immediately wash off the pad soapy water.

I'm new to the PSA pad thing, having used hook-n-loop for years, but for this one application the PSA works much better.

Thanks in advance for your advice to a newb.
#5
M

Start with Alcohol. Use a lint free cloth, if cleanliness matters.

I used to use all the crappy cologne I got as gifts, for removing decal remnants and tape residue. Rubbing alcohol from the drug store is fine. Vodka will do if you have that, as will any number of other products, like gas line antifreeze, lock de-icer, Methyl Hydrate, etc.
D

Most of those adhesives are rubber based and something in the non-polar solvent group will work fine. What is that? Oil. Vegetable oil, WD40, Olive oil, mineral spirits. Most of those will do it, but the more aggressive solvents will trash your acrylic base, so I'd stick with mild oil to start. Let it soak a bit and rub hard with paper towels or mild scotchbrite. Carb cleaner, diesel, gas will all do it too, but are much more aggressive and will probably damage your acrylic.

Water, alcohol, soap won't do it as those are all pretty polar.
T

I'll add in one other option. Heat.

Have used a folded up paper towel, in a sandwich bag. A little water. nuke it for 20 seconds or so in the shop microwave, and you have a nice, local source of not-too-hot heat. Apply to the surface and rub, or apply a paper towel to the surface and use the heat to stick the adhesive to the paper.
C

A trick that I use when using various psa's is to first cover your surface with blue masking tape, before applying the sanding disc. This is also useful when using double-sided tapes for woodworking purposes (e.g. sticking a fixture onto a wood part for routing), as it keeps from pulling up the grain, and/or leaving the tape residue on the work.

It also may help to rough up the surface or score it to reduce the surface-area that the adhesive sticks to.

What that means is that when I need to remove some stubborn adhesive that is sticky, I reach for a similar sticky adhesive. Like duct tape.

Other types of adhesive tape can also be used, but duct tape seems to work the best.
S

dstig said:
Most of those adhesives are rubber based and something in the non-polar solvent group will work fine. What is that? Oil. Vegetable oil, WD40, Olive oil, mineral spirits. Most of those will do it, but the more aggressive solvents will trash your acrylic base, so I'd stick with mild oil to start. Let it soak a bit and rub hard with paper towels or mild scotchbrite. Carb cleaner, diesel, gas will all do it too, but are much more aggressive and will probably damage your acrylic.

Water, alcohol, soap won't do it as those are all pretty polar.
Click to expand...

Absolutely, and the way to find out if a particular material will damage the acrylic is to try a bit on an edge using a Q-tip.

And then there's the web. It took only seconds to find this compatibility list.

Agree with dstig. I'm not a fan of what most people use WD40 for (that is, lube), but I do use it for removing sticky labels and similar from substrates including acrylic. Spray it on, let it sit for "a bit", then do the removal with a bendy-plastic scraper. 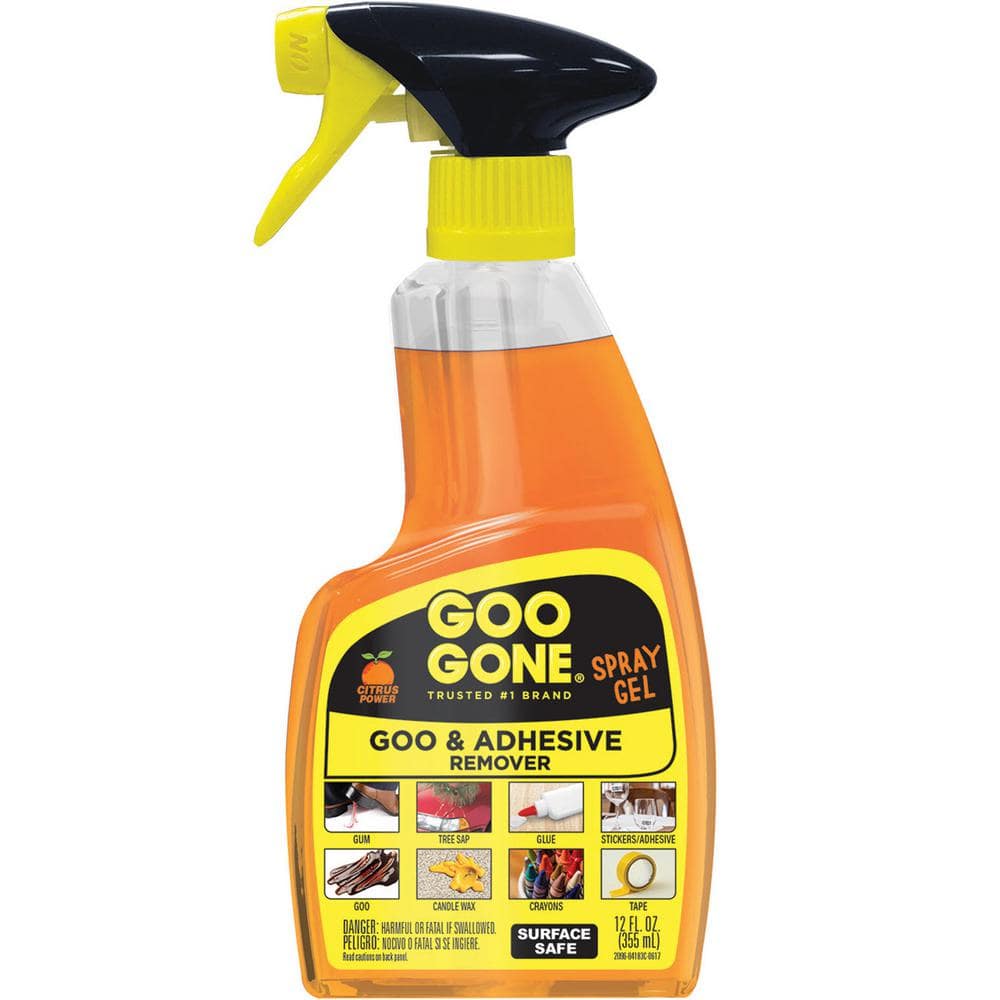 The Goo Gone's line of products is a trusted brand, we stand by our products for all of your dirty, sticky, messes. Safe for you, your surfaces and your home. Please explore our line of Goo Gone Original,
www.homedepot.com

Citrus based adhesive remover is the way to go with sort of thing.
J

I use VM&P Naptha, also sold as lighter fluid.

I use Dissolv-It, and occasionally Goo-Gone. Both are citrene based solvents sold at hardware stores. They work great. I have found that Goo-Gone eats some types of plastic, so I normally use Dissolv-It, which has never crazed, clouded or etched anything I've used it on. I use Dissolv-IT to get price stickers off CD/DVD cases, where Goo-Gone will frequently cloud the cases (polystyrene, generally), and off book jackets, where it does not smear the printing inks. I am confident Dissolv-It will not eat acrylic. Not sure about Goo-Gone.
I think Dissolv-It is available in a couple of strengths. I use the retail spray bottle. The "contractors" version may be more concentrated.

You do have to get the solvent down to the adhesive layer. If the body of OP's PSA pad is not porous, the solvent will have to creep in at the edges, so getting as much of the pad off as possible, and maybe scarifying the residue to make more paths for the solvent, will help.

Yes. Goo Gone is extremely useful in removing adhesive. Test it on your acrylic to ensure compatibility. It's not good on many elastomers, it's fine on PTFE. But it's the go-to product for getting those invented-by-the-devil sticker adhesives off stuff. Active ingredient is d-limonene, a natural product.

Haven't used de-solv-it, but a quick glance at the msds's from the firm shows that there are many diffferent products they make, some of which contain limonene, some of which don't. I suspect that you probably want limonene but it also may be the stuff that could partially dissolve the acrylic. A small test patch is justified in all cases I suspect.
Z

dstig said:
Most of those adhesives are rubber based and something in the non-polar solvent group will work fine. What is that? Oil. Vegetable oil, WD40, Olive oil, mineral spirits. Most of those will do it, but the more aggressive solvents will trash your acrylic base, so I'd stick with mild oil to start. Let it soak a bit and rub hard with paper towels or mild scotchbrite. Carb cleaner, diesel, gas will all do it too, but are much more aggressive and will probably damage your acrylic.

Water, alcohol, soap won't do it as those are all pretty polar.
Click to expand...

Yep, I use good old vegetable oil to remove labels from glass. I switch up to WD-40 if I have a really stubborn one.
D

Hexane works very well and will not damage most plastics or paint. When (lithographic) film was king we used hexane sold as Anchor Film Kleen and private labelled by many printing supply dealers.

FILM KLEEN 7065 ANTI-STAT GALLON
www.fujifilmdirect.com
The price has jumped and the "Hazardous Material" shipping surchage doesn't make it any easier.
Don't soak an oversize rag to clean a small area. It will evaporate quickly and waste your money.
Take a small piece of paper towel, about 4"x5", fold it to postage stamp size, place it on top of the adhesive to be removed, and add just enough liquid to saturate it. Let it soak, then wipe. Repeat as needed.

Intact labels are easily peeled off with the heat of a hair dryer.

Xylene dissolves rubbers but not all plastics. It might be ok for acrylics.
S

On my 12" disc sander, I just heat it with a propane torch and peel it off.
After that, I clean the aluminum platen with red brake cleaner.
Crap sails right off.
You must log in or register to reply here.

I
BEST METHOD for cleaning coolant-machined Al parts for blasting and anodization??

May 10, 2021
Alloywheels
A
M
Rust: Chemistry, Prevention, Removal, and Conversion
2

Sep 17, 2014
t.jones
T
S
Does anyone use water based finish on production items? Experience?