How we crate a Deckel FP1 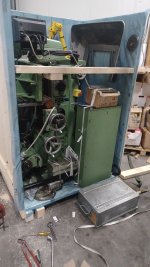 Hello from Australia. When crating for shipment to Australia, do fluids (eg gear box oil) have to be removed? Thank you.
S

Given the damage done to Australia by non-native creatures and organisms I can fully understand why they are so strict.

ricgstevens said:
Hello from Australia. When crating for shipment to Australia, do fluids (eg gear box oil) have to be removed? Thank you.
Click to expand...

Scottl said:
Given the damage done to Australia by non-native creatures and organisms I can fully understand why they are so strict.
Click to expand...

Worst thing was the invasion of those 2 legged mammals
P

It’s good to post this, nice work. I just recently sold a cutoff saw that I vowed I wouldn’t ship. I got talkied into shipping it. So, just went through this process myself. Lots of work! I had it bolted to the bottom and tack welded the nuts on the bottom and staked them on the top.

Regarding the stink bugs, miserable creatures! About a month ago it was a beautiful fall day so I worked with the roll-up door open all day in the shop. I must have gotten 200 of them in the shop. I wound up stomping 10-15 a day in the shop for a few weeks. We’re in the woods here and have them bad.
S

Peter from Holland said:
Worst thing was the invasion of those 2 legged mammals
Click to expand...

So say many of the original inhabitants.
M

Really nice packaging job Peter!!
You must log in or register to reply here.

How I crate a HLV